Vivo's V series is the company's "mid-range", youthful and creative series. At the beginning of this year, we reviewed both the V23 and the V23 Pro and ended up quite pleased with both. A few short months later, vivo is skipping a number and already moving to the V25 family. Today we have the V25 Pro in for review. It is a similar phone, at least in overall spirit, to the V23 Pro. Namely, it is aimed toward a creative crowd with an impressive camera setup that tends to punch above its price class and a particular focus on a great selfie experience. 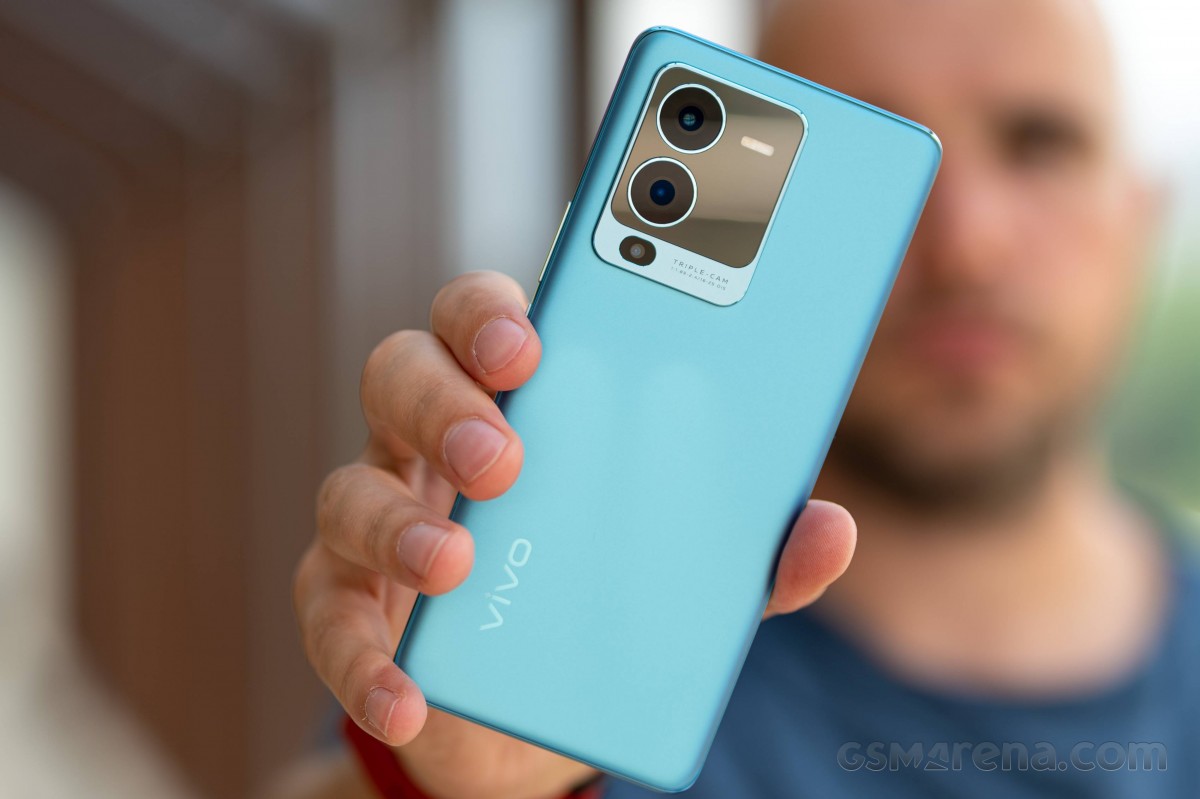 Compared to the older gen, the V25 Pro now has a lower-resolution 64MP, SAMSUNG GW1 sensor that packs EIS and new for this year - OIS. The ultrawide camera has been beefed-up to a 12MP unit too.

On the selfie side of things, vivo decided to drop the second ultrawide camera and simplify things a bit with what is now a single 32MP Samsung GD2 camera. We'll have to see whether it actually constitutes an upgrade over the dual selfie camera setup on the vivo V23 Pro, but the autofocus feature is still there, at the very least. That makes the V25 Pro an appealing offer for a younger crowd of social network enthusiasts and creators.

Just like its predecessor, the vivo V25 Pro maintains a fresh and youthful design and exterior yet again. Vivo is offering a new twist on its color-changing finish for the phone's back cover. You have to get the phone in Surfing Blue for that extra visual flair. And if that's not up your alley, there is the tamer Starlight Black option. 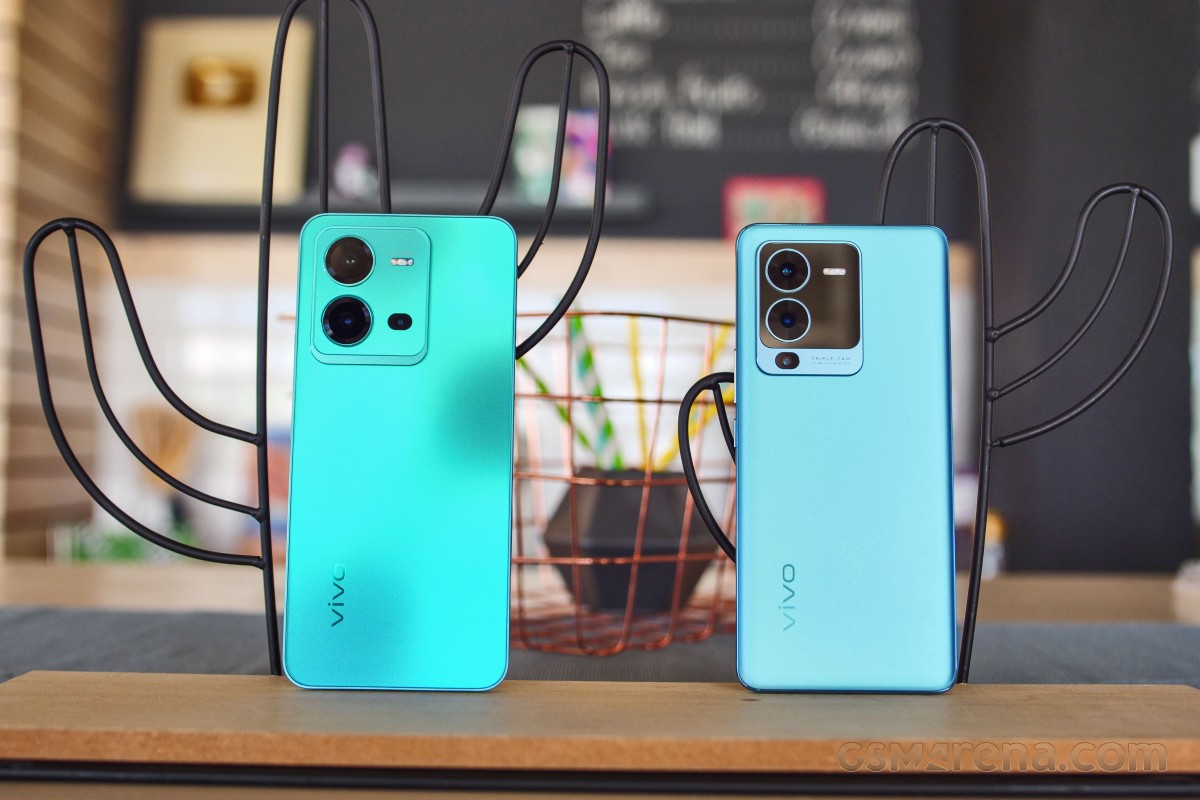 The V25 Pro gets a few more slight specs bumps compared to its predecessor, too, like the new MediaTek Dimensity 1300 chipset - a slight refresh of the Dimensity 1200, which we are eager to test for ourselves. The V25 Pro also gets a faster 120Hz display, a bigger battery, and faster charging are also part of the mix now.

Before we move on any further exporting the V25 Pro, we should take a look at its retail box. The vivo V25 ships in a sturdy cardboard two-piece box. It is pretty tough on the outside, and inside there is a plastic cradle to hold the phone. It's all very secure. 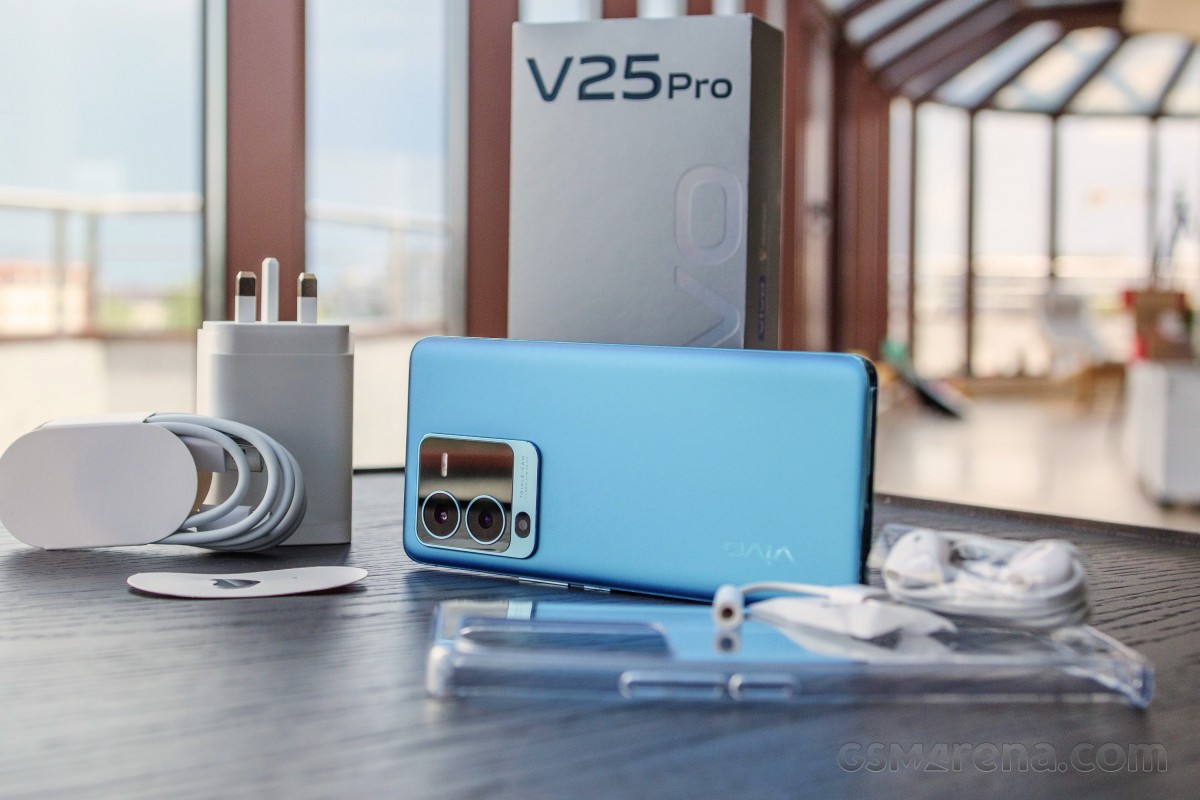 The V25 Pro ships with one of vivo's 80W FlashCharge chargers. The phone won't be able to fully utilize the capacity of said charger but will use its 11V@6A - 66W output specs at the peak of its charging instead. That's not too shabby at all. There is a sturdy USB Tyle-A to Type-C cable in the box. You should keep track of it, just like the charger, since both are non-standard and required to charge the V25 Pro at full speed.

Vivo was pretty generous with the accessory package of the V25 Pro. You get a nice, soft but thick transparent TPU case in the box. Also, a pair of earbuds with an inline microphone. Initially, the latter took us a bit by surprise since they have a 3.5mm jack - something absent from the vivo V25. However, digging a bit deeper in the box revealed a Type-C to 3.5mm dongle. Overall - a very rich accessory package by modern standards.

Does it work with wireless microphone with type C charging point?

This is very nice phone